Well a month or so ago I dropped a big long post on you about our trip to the Biltmore House.

The post was too long and yet still did not capture the magnificence of this building.

I never got to the part about their backyard!

Yes, a trip to the Biltmore House only starts with the house. At one point Mr Biltmore bought all the land around him. The land was used up timber land at the time and he could get it pretty cheap.

So who do you hire to make the country’s largest backyard? 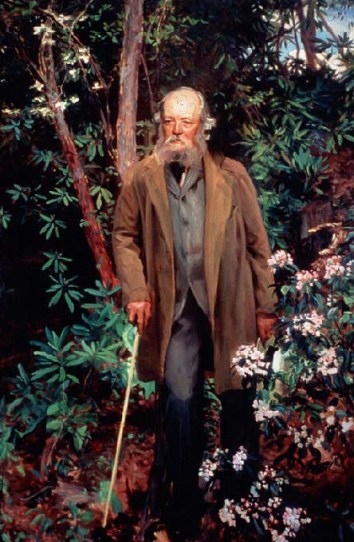 Well, Frederick Law Olmsted, the father of American landscape architecture and the designer of New York’s Central Park as well as several other urban parks in the US. But I am not going to go all Wikipedia on you today.  Let’s just say our kids had a blast playing in this big backyard!

First of all Mr. Olmstead created, among many things in the outdoors of this American castle, not 1 but 7 gardens for the owners to stroll through as well as designing the trails down to the Bass Pond and Boat House where the Biltmore’s could fish in their own pond.

The gardens included an Italian Garden,

a shrub garden, the walled garden,

the mandatory rose garden,  an azalea garden and a bright spring garden. 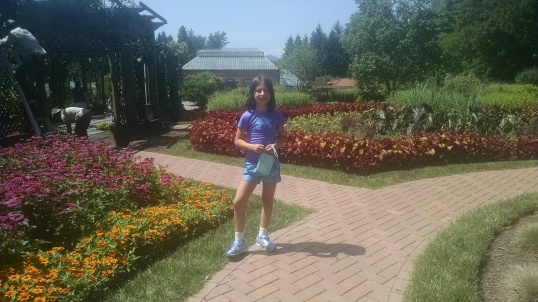 Behind the spring garden was my favorite place, what they called the Conservatory 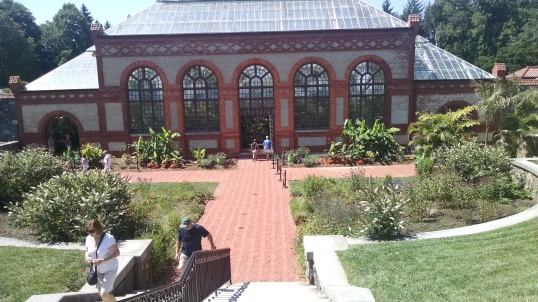 …but what I called the Palm House, a green house full of specialized palm trees from around the world.

The brochure reads that this glass roofed building nurtured exotic orchids, ferns, and palms the Vanderbilts used to provide flowers for the Biltmore house 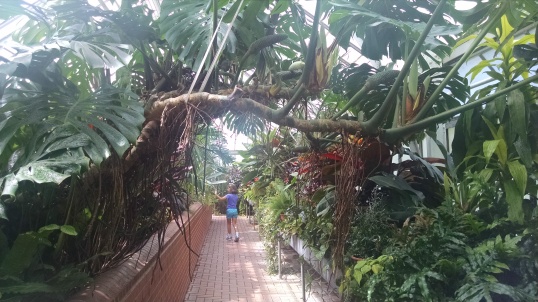 It was a very gorgeous place and indeed very exotic.

on first appearance it is a palm tree with scales

This 10 ft tree, known as a Pony Tail or Elephants Foot has little root system and is actually closer to an agave then a tree.

In trying to create a very smaller version of this in my home I could really buy in to the beauty of this concept.

Yes one day my sun room may look like this… nahhhh

After visiting this house, it was such a beautiful day, we decided to go for a hike down the fancy forest.

This was a real treat for me, taking me back to hiking and natural discoveries I had as a youth. I think the same went for mom.  The kids loved the surprises of new things and following a little magical stream.

And it was at this point we realized our girls had never experienced this type of nature before. Things like skipping stones or finding frogs and tadpoles, or building beaver dams!

So we actually stopped for a few moments and built our own beaver dam there in Mr. Vanderbilts backyard.

The trail itself was a beautiful creation, not lined with but filled with displays of different types of trees.. again from all over.

And eventually this trail led us down to the Bass Pond. 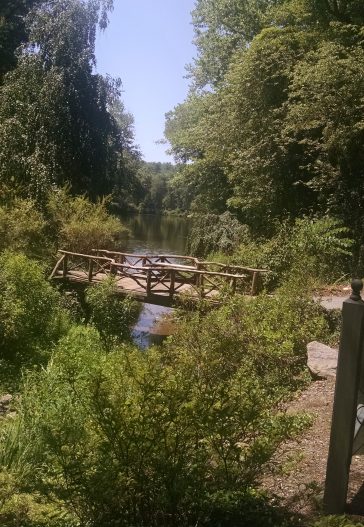 Yes, can you imagine having these gardens and trails leading to your very own Bass Pond escape?

Well we kept following the trail around the pond, each turn wondering if we might spy something new. 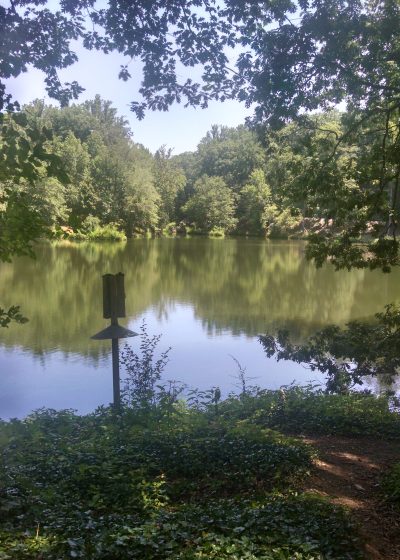 It turns out this was indeed a man-made lake with some nifty man-made waterfalls at the back-end of it.

Do you think the kids enjoyed this?

It was clear our girls had never played in nature like this before since we live on the coast. It was a time for discovery for them and making memories. So we honkered down here for a few minutes while they played and made a few more beaver dams.

While sitting there watching the girls play we realized that the next part of our Summer Getaway was to be in a fancy tent along a river where we would be whitewater rafting the next day. Seeing how much the kids loved playing in this water and the discoveries they were making… 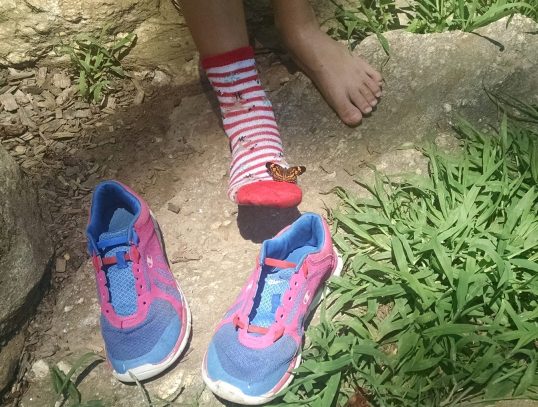 A wonderful afternoon of discovery

…here we decided to forgo the next part of our trip, a tour through the Biltmore Winery, and  just make tracks down to where we were going to staying that night so the girls could play some more in nature and build some more dams.

Yes, through all this day of hiking and climbing the Biltmore House I did have however many hernias I had at the time. I was going slow and taking it easy. Walking uphill was no thrill! But as I sit here today with three new scars on my belly I have to wonder…..

Can anybody bring me lunch? I’m starting to get my appetite back..

It was as special, little-house-on-the-prarie day for the girls though. And any parent will tell you seeing those smiles makes it worth it. 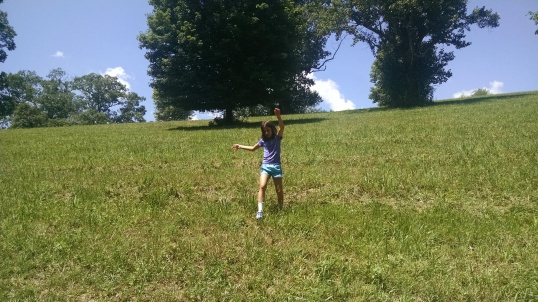 Have a great weekend knuckleheads!

I will try to do a better job next time..

Like Loading...
Posted in Travel and tagged bass pond, Biltmore House, can I sit down for a minute, hiking, I never promised you a rose garden, palms, pony tail palm, you go on ahead i'll catch up