Folks, I have to apologize. I have been lax on my blog posts here because the camera is busted in my phone. I can’t take pictures!

But I did not want to let friends and family down for Trick or Treat night. So I had to whip out my trusty ol’ Casio 35mm camera to capture the event. So, with my apologies, all these pictures are about 3 seconds late now, if you know what I mean.

No? If you don’t remember your ‘old’ 35mm cameras, you will see what I mean a little later.

But first, to  answer all your questions, may I present this year’s Halloween customs: my very own Cutesy Cops! 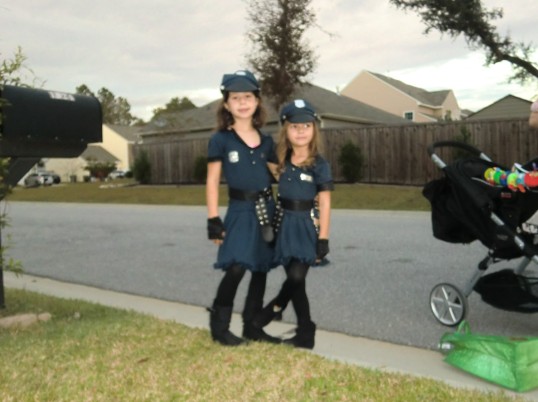 This year we traveled with a few other undercover CSI candy detectives for Halloween, officer Miranda, disguised at Princess Sophia and officer, Kate disguised as the mom of a new-born pumpkin. 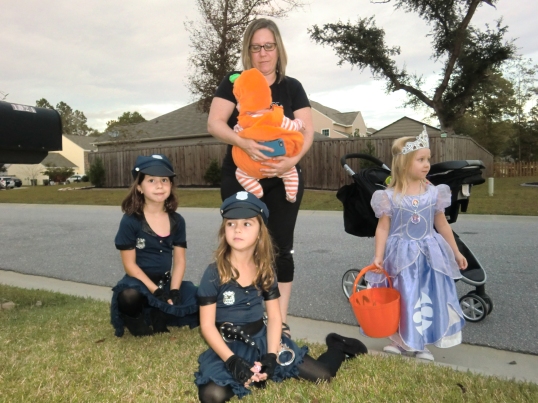 This year’s assignment, stake out the neighborhood in search of counterfeit chocolate, fake Tootsie rolls and suckers, as well as and bootleg gummy bears. Rumor was….there were a heist of Reese Cups to be found somewhere!

And so as the sun started to set. …they were on it! 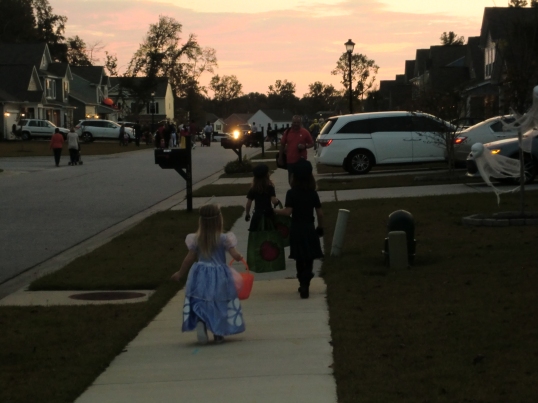 Now the evening was full of scary costumes and decorations and people. But no one was scarier than the man in the picture above drinking a can of beer  with an iced 6-pack slung over his shoulder in that portable cooler…by himself on Halloween night

Like this with the mummy standing in the corner: 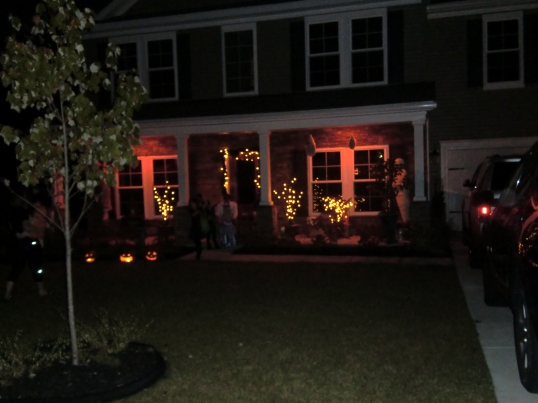 Some people really take this Trick or Treat day seriously!

Some diabolical homeowners have to actually scare you first before you get ‘their’ treat…. 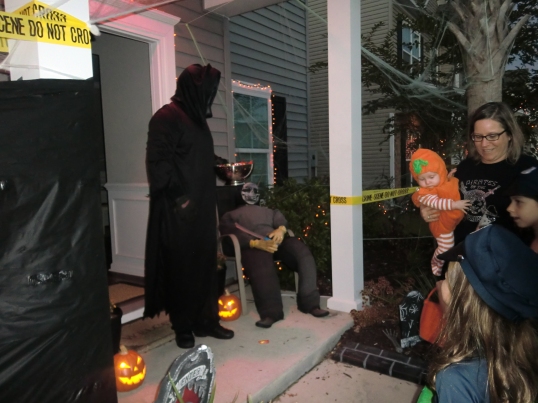 I want to see your Warrant

There was a life-size statue of Darth Vader that instantly got animated as soon as you reached for his candy; light-saber and all. The screams came then!

Here might have been the most elaborate Scare in our neighborhood. My police officers had to call for their superior, Detective Daddy, before they approached this joy bed of Candy mayhem… 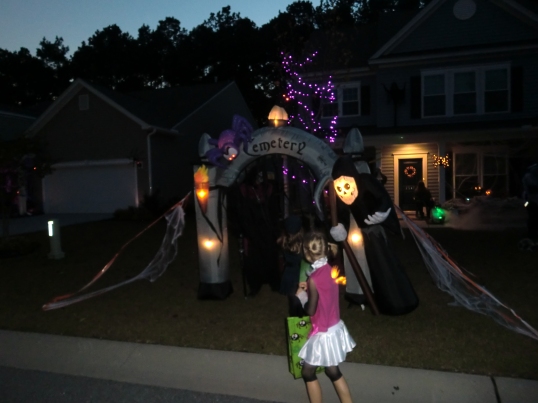 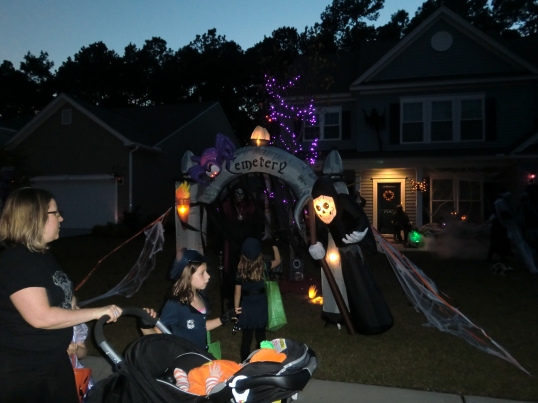 Open Up In The Name Of the Law!!

But with multiple adults running around with wicked laughs and sickles my Cutesy Cops didn’t know if they could handle all the scariness by themselves. 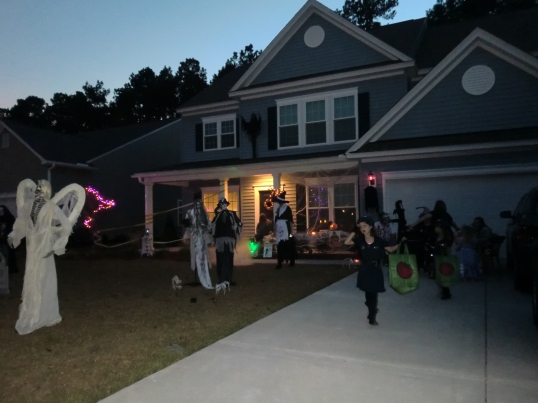 I’m calling 5-oh for some back-up

There seemed to be a lot of houses dressed up with huge huge spiders! Spiders were very trendy this year in house outfits. One house had a house projector with 3 foot spiders shined, crawling all over their house. There were lot and lots of webs to avoid too.

And then there was this house I wanted to show you that had an air-filled spider on the roof. But here is where the 3 second 35mm camera rule fell into play.

I snapped the picture…and BAMM!! 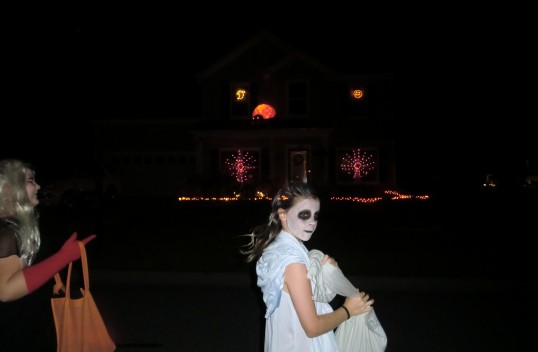 …this Twilight girl got BIG Flash right in the eyes as she walked in front of me.

She said, “Ouch!‘ I shot her right in the eyes!

Here was my intended target… 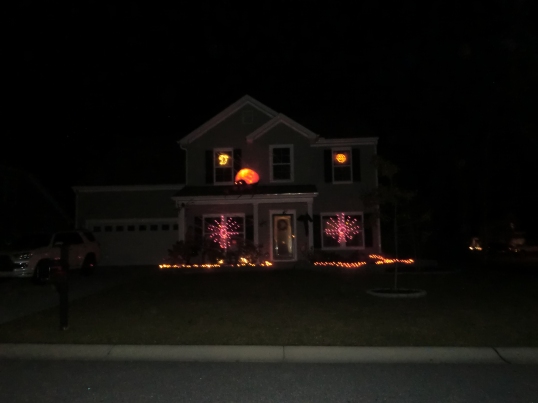 It was a great fun night for the girls.

They got their treats! 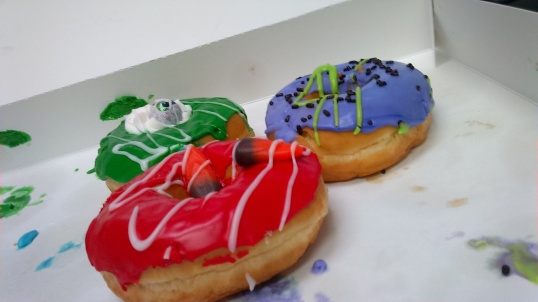 Yes, that is an eye ball sticking out of that green donut

But by far MY biggest treat came at the end of the night as I was putting Dylan to bed.

You see before trick or treat the girls spent the afternoon at their nanny’s house as she celebrated the 1 year birthday of her only son, Luke. Our girls have watched Luke grow over the years as he is here in our house every day she works. So they have grown quite found of baby Luke.

Well they had a great time at his birthday party, cupcakes, jump castles and all, only to come home, scarf down some dinner, put their CSI outfits on and go trick or treating harvesting a bounty of snacks and sugar.

What a great day to be a kid!

So as I tucked Dylan in I kissed her good night and I said, “You had a pretty good day today didn’t you?” reflecting over the fun day’s festivities.

Dylan agreed but said, “Tomorrow is going to be an even greater day!“

This 7-year-old is wise beyond her years.

When you get to may age and above, we all know and think about this.

How old are you again?

Happy Trick or Treat everyone!

We hope you had a sweet and scary weekend too!