One Vice Gets a New Fix

Remember all those trips to Ocean City, NJ we made in the past?

And remember one of our top favorite destinations in OCNJ?

Warm, fresh, made to order donuts?

Well forget about them!

I found a new warm and fresh and made to order donut stop here in town and they actually have a menu for all the different combinations of ingredients. (drum roll please)

Everyone let me introduce to you the Fractured Prune!

But they make warm, fresh, made to order donuts but add a sundae bar kinda thing to it.

But they dont stop there…

Fractured Prune has a whole menu

to help you pick your poison.

Fractured Prune is actually a Franchise out of the other Ocean City, Ocean City Maryland. They were so popular on their boardwalk that they started franchising.

Brown’s donuts never paid attention to me when I said I wanted to open up a Browns donuts.

And the concept is simple.

You come in to Fractured Prune and fill out what you want and how many on a card. Hand the card to the cashier, who hands it to the donutmeister, who makes the unique fresh donuts. mmmmmm

So there you go,

my new vice found a home in Fractured Prune.

Where ordering and making donuts is so simple even a monkey could do it!

How can you have just one?

That’s it for now knuckleheads.

I will try to do a better job next time.

I am still trying to understand this new WP block type of writing.

There are so many things I used to do but now cannot.

Who do I complain to?

I bought my wife cooking lessons for her birthday.

Yes, I was going out on the ledge here,

hoping she wouldn’t get offended.

But she thanked me for them!

The cooking lesson was with one of Charleston’s celebrity chefs, Bob Waggoner

Chef Bob is by far more than just your average super chef.

He was trained under Great Chef Michael Roberts at Trumps (before The Donald) in Los Angeles.

He then traveled to France and worked under another dozen Michelin-starred chefs for several years, then down to Venezuela for a year to work under Jean-Paul Coupal.

In 1986 he returned to France as chef at the Hotel de la Poste in Avallon. Two years later, he opened his own restaurant, Le Monte Cristo, in Monéteau. In 1991, he closed the restaurant to join Jean-Pierre Silva at Le Vieux Moulin.

In 1994, he returned to the U.S. to work at the Wild Boar in Nashville. The restaurant received numerous awards.

In 1996, the Great Chefs television team showed up to tape Chef Bob for the Discovery Channel’s Great Chefs of the South series. This led Chef Bob to his own cooking show on PBS and later Turner South, in part because of his cooking but also due to his large personality we soon found out.

Our evening was marketed as a dinner party with 8 other interesting people. We were to create a 3 course meal, using fresh, local ingredients as well as the executive chef ways of preparing those items.

We mingled a bit at first, finding out about our other chef trainees and  coaxed on with bottomless glasses of a French pink Champagne. Bob mingled as well and we all got to hear some of his stories in a very down-to-earth manner (he is a funny guy)

Bob had everything prepped for us 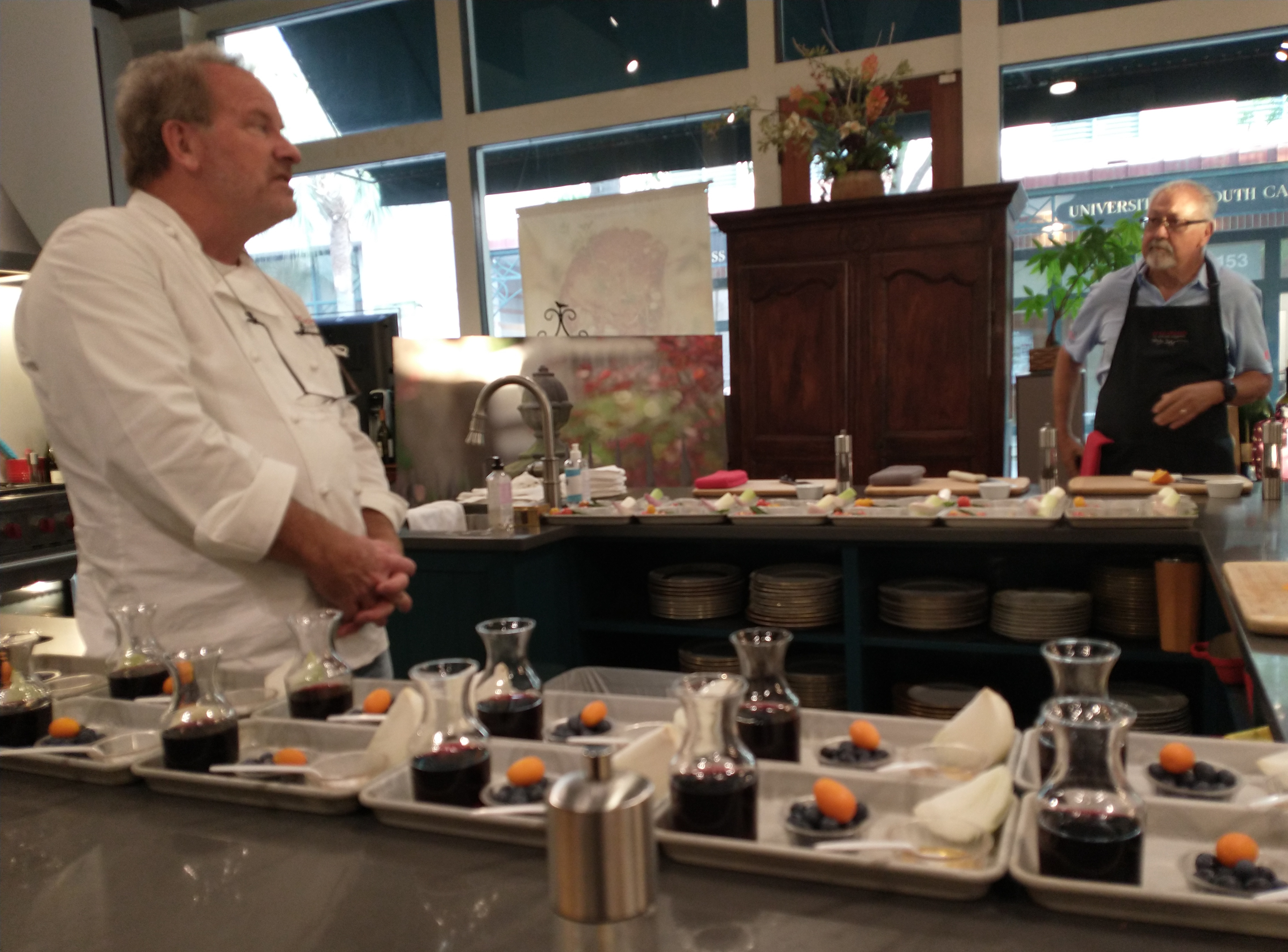 I want to tell you what these recipes are called but…..

Call it my beginning of dementia.

Call it the four glasses of pink champagne that I had before we started prepping dinner.

And Yes, I don’t remember what the name of the pink champagne was either but it was good!

I guess I should have taken notes.

Thankfully I did bring my camera.

First we made a dessert sauce reduction using 2 bottles of wine and a handful of fruits and spices.

This simmered the whole night while we cooked.

Here are a few cooking tips he gave us.

1) When slicing, cut with the back end of the knife. Keep the sharp end on the cutting board

2) He uses Grape Seed oil as his vehicle for seasoning pans. It gives off virtually no taste and you can cook with it at extremely high temperatures.

3) If you are in a sea food store looking for scallops ask for the ‘Dry Packed’ scallops.

He tells us most scallops come off the vessels and are put into a large tank where they are iced down but also some preservatives are added.

These can be seen when you cook the scallops and a milky white liquid comes out from the bottom. As you can see above there is milky liquid coming out of these puppies.

Its just fresh fresh scallops and some seasoning.

We seared the scallops on Stupid Hot heat then sauteed the vegetables prepped for the sauce.

We finished cooking the sauce, laid it on our plates and placed some prize scallops on top.

Time to taste this treat we expertly made (thanks Chef Bob).

The second course was a fantastic Duck recipe.

I forget the name but its in his cookbook.

Well I have to be honest,

I can’t pronounce the recipe either.

It was in French.

We used some sugar snap peas, sliced onion, some fresh honey, blueberries, a kumquat, and about a cup of Cabernet.

We all stood at our amazing cooking stations, first searing the duck to hold in the juiced and then baking the duck with some duck grease (think bacon grease but better) to keep it moist and yummy!

We got to hear more stories and jokes while the product cooked.

Q. Why were we using metal spatulas on the high priced Teflon saute pans?

A. Because Mrs. Waggoner was not there to tell him he couldn’t.

We dressed it and viola:

restaurants can / may charge $5 extra

just for drizzling the sauce around the side of the plates, like above.

Can you see in the sauce?

Cabernet, blueberries, a kumquat and some honey sweet onions.

Finally. we placed some fresh berries in a dessert cup. added some yummy vanilla ice cream over top and then the reduced dessert sauce of wine, cloves, and other ingredients that I cant spell.

So in the end, I made my wife a wonderful three course dinner including

I made it for myself and she made hers.

But she DID have a fab birthday dinner overseen by a very talented Chef,

as well as Chef Waggoner.

and lots of wine.

Oh wait, that was me,

but she didn’t mind.

The dinner was a breeze.

The object was to please

my wife as she smiled and said

That’s it for now knuckleheads.

I’ll try to do a better job next time.

Until then be safe and show someone some gratitude.