When was the last time you turned 10 years old?

We are in peak birthday season here in 3D.

My oldest just was spoiled, er, enjoyed her 10th birthday.

Do you remember when….

I could still pick her up?

….and still get some air when I tossed her?

…or her getting married

Daddy, I want to get married. You don’t mind do you?

or learn to swim 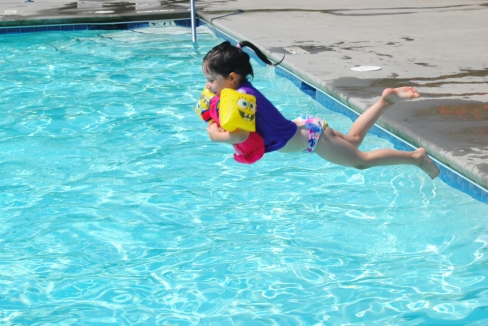 Or get a new sister…

or become the first best present I ever had?

Kids ARE a gift!

But I know what you are thinking…

…with breakfast in bed

It was at the trampoline place but she wanted it with a football theme..

She soared high in her trampoline b day

Yes, jumping there in the center in the pink pants with her friends looking and falling around her.

I was kinda nervous watching her. Most of her girl friends are into gymnastics now and all of them were doing flips and cartwheels on the trampolines .

Each one would get bigger. Bigger flips. Bigger cartwheels, Bigger bounces.

Does anyone else hate the words from their kids, “Hey watch this and see what I can do?” 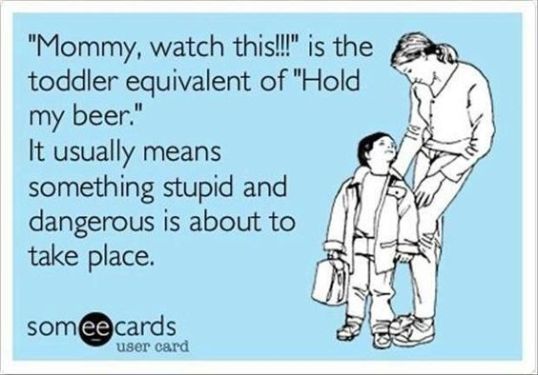 Remind me to tell you the story of when I tried to jump over the hammock..

Well the hours of play time were up and we herded all the sweaty happy kids to the pizzas and cakes. Mommy pointed to the ‘Thank You‘ notes that Dylan had typed up for each one of her party friends.

So I opened one up and read…

She typed these up two days earlier and printed them on the computer but nobody told her what to say.

She is a planner and an organizer like that. The over the top thank you note blew me away.

(I’m not that creative on my best day)

She has always been a’ happy kid’ since day one. And this note illustrates how thoughtful she is too. Yes every kid got this note.

Not every kid read them as i found several on the floor. But that is another story.

She had a great time.

We / they had a great time.

No bones were broken

….Another successful party then!

One down, one more party to go!

Have a great weekend everyone and a very special Easter holiday!

I’ll try to do better next time knuckleheads.

This is exactly how I feel this morning, the Monday after Daylight Savings Time. I think I am going to go celebrate Nappy right now…

n is for napping in a nook

napping day is an unofficial holiday that falls on the monday after daylight savings time begins in the united states. the day was created as a way to compensate for the hour people lose because of the time change. this is one holiday that most people can get behind.

studies have shown that one or more short naps during the day can help increase productivity and alertness. it is believed that many successful people in history napped often such as: einstein, churchill, and napoleon.

Posted in Archives and tagged I'm so tired, It feels like 4am, someone hit the Snooze button, why is it so dark out?

I Need Your Help….

I have something to tell you. I have been reluctant to bring it up but the time is drawing near.

Do you know what happens to nice, kind guys like me in the slammer?

But this is no joke.

For those of you that know me or have been following this blog for a while you know it’s not the first time.  😦

Every day, kids and adults are diagnosed with muscular dystrophy, ALS and related diseases that take away the most basic freedoms – the freedom to walk, talk, hug and even breathe.

Unable to walk or talk?

So on March 22nd I am doing a little time, to do a lot of good by being a Jailbird at a Muscular Association Lock-Up to help give those freedoms back.

Please, please, please consider making a  donation towards my bail and support me, and the thousands of kids and adults who will be served by MDA this year.

It’s easy — just click on this secure link to my web page to make a tax-deductible donation.

Meaning, for you here in the US, you can get your money back.

Look out your window today and notice the kids playing. Then think of one small child on the side that is unable to play or keep up or just do normal things because of Muscular Association.

I am so grateful for the gift of no limitations with the body I was born with. I would like to do a little something for those that were not as fortunate.

Would you consider paying it forward too?

Thank you in advance for joining me as I fight for everyday freedoms for individuals with muscular dystrophy.

If you have any questions or comments please let me know below.

For those of you that are thinking, ‘Fine. let him rot in jail.’ Well the MDA has a link where you can pay for that as well.

We were all going to ride bikes at the local county park as it was Free admission today. But my little soprano tried to bring here Hoverboard in instead.

No dice the park ranger said.

So, as I raced back home to get her roller blades, I craved a Mountain Dew. And I thought, where am I at in my parenting, or life, that I would prefer a Mountain Dew right now, on a Sunday afternoon, instead of a beer or margarita?

Yes, that’s as deep as I get I’m afraid.

Listen, there is a GREAT movie out at the rentals right now, WONDER!

You have probably seen the commercials for it and have an idea what it’s about.

I really didn’t want to see it.

But oh what a movie!

It is the predictable story of the little boy pictured above but so much more. It’s about everyone around him too; and why they act the way they do even when they disappoint you or surprise you.

Friends, Sister, BF, Mom, Dad, everyone. And THAT surprised me..

Its funny. Its sad. Its heartwarming. Its tears and laughter. Its surprising and Luke Wilson’s character is so me.

Based on the New York Times bestseller, WONDER tells the incredibly inspiring and heartwarming story of August Pullman (Auggie), a boy with facial differences who enters fifth grade, attending a mainstream elementary school for the first time.

Anyone with children in grade school or middle school should really see this movie. There are so many life lessons in it. For all of us. And that we all have our reasons..

Check it out with your kids!

Oh, and one last thing….

Dylan has a birthday coming up. She is into football now at recess and so asked to have a football themed party.

She even asked me to invite Saquon Barkley from my favorite college to come down for her birthday too. … from all those times I said to her, “hey Dylan, watch this!” after Saquon does another highlight reel move.

Well @saquonb21 is having a pretty good week at the NFL combines this week and he has been too busy to to notice my humble little Twitter request.

As it to turns out his hometown is throwing him a ‘going away party’ the week of Dylan’s birthday, before he goes on to the NFL. 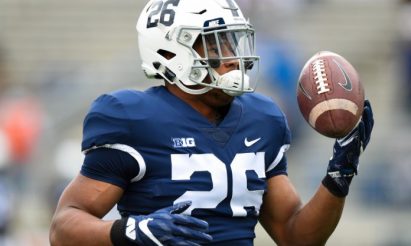 So if there are any famous NFL or college football players reading this, would you want to be the guest of honor at my little girl’s birthday party in March? Maybe you @haleyboy10 ?

You can be the honorary Team Captain (and some great PR).

And make some little girl the Big Kid On Campus for at least a week for and after her birthday week!

That’s all for now knuckleheads. Have a great week!

I’ll try to do better next time….

Posted in Archives and tagged auggie, Coach Franklin could bring you and get some recruiting out of it and expense the whole trip, Go Saquon!, Grant Haley, I love that face because it belongs to my son, movie and a popcorn, Wonder