Being a Tourist In My Hometown, Pt 1

This month we ran across something that the Charleston Visitor’s Center is putting on for locals, the Museum Mile. In January, the tourist trade is down in our town so it is a great time to be a tourist with this Museum Mile.

This promotion gives us access to participating Museum Mile sites with the purchase of one low ticket price. With the Museum Mile pass, we can spend an entire month learning about Charleston’s rich history and culture; a place we read about, and our kids learn in school, but never find the time to experience.

There are over 20 museums, museum houses, and other historical buildings to explore on this package. This past weekend we decided to tour .. 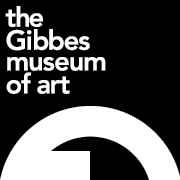 So can I introduce you to the Gibbes Museum of Art?

“Through our complicated history, through light and shadow, we have persevered – humanity intact.
Art is the reason.”

“When the Gibbes Museum opened in 1905, the nation celebrated what Charleston has always understood: the power of art – to inspire our imagination, heal our hurt, and nourish our souls.”

(shhh…I’m getting all these sayings right off their website)

So if you are interested in taking a brief tour through a historical art collection with some pretty interesting things found in art, subjects, expressions, mediums, or stories behind the scene, read on.

I copied some of the tags of the art work that accompanies these gems in the museum so the real story of the paintings does not get lost in translation.

So grab a chair or beverage, and lets stroll through some of the rooms of the Gibbes and see some great works of art that I found very interesting. I am sure there is something at the Gibbes for everyone.

Now I do not know much about art; maybe two things. 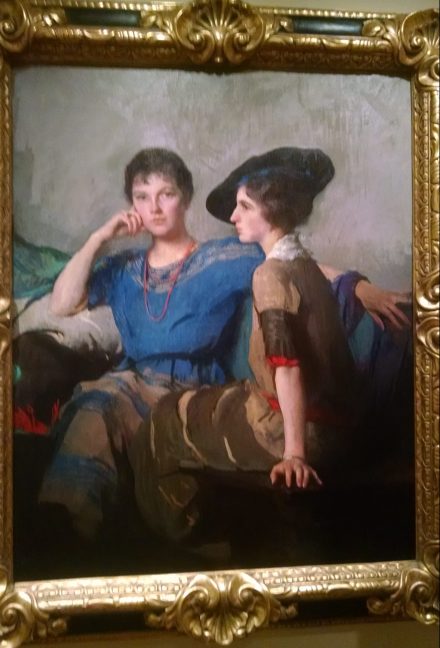 Does this remind you of someone? What could she be thinking about? 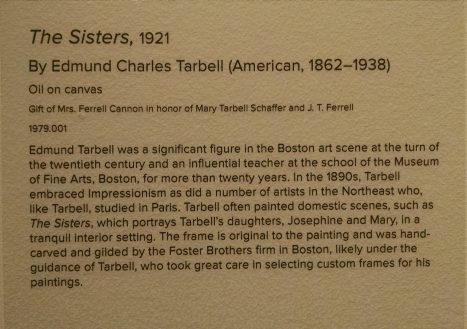 First thing that you might notice is….. I am not a Photographer. It seems I am listing to the right on all these pics.

So what is art? What is not art?

Does this make you think?

Here is a local piece called the Betwixt and Between 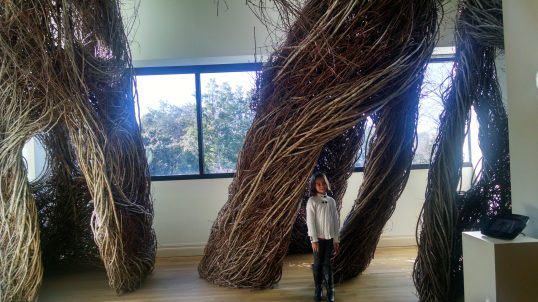 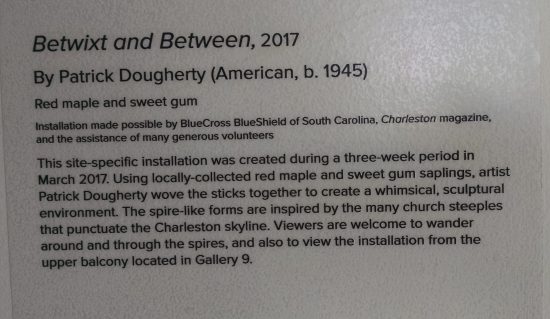 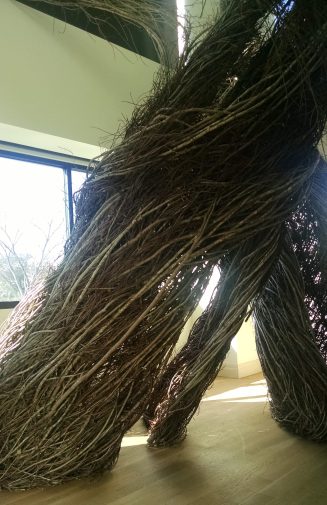 I am not sure what it makes me think of other than how did they do that and will it start to decay? 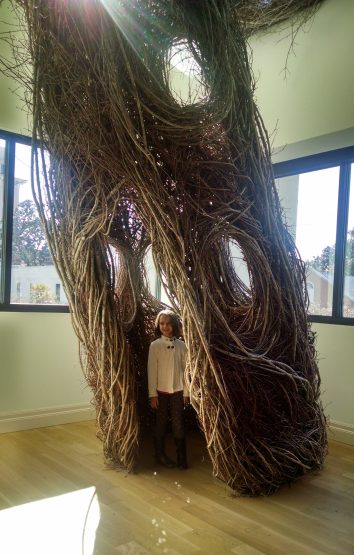 Here is my other daughter, Skylar

But there were several other exhibits besides this natural one. 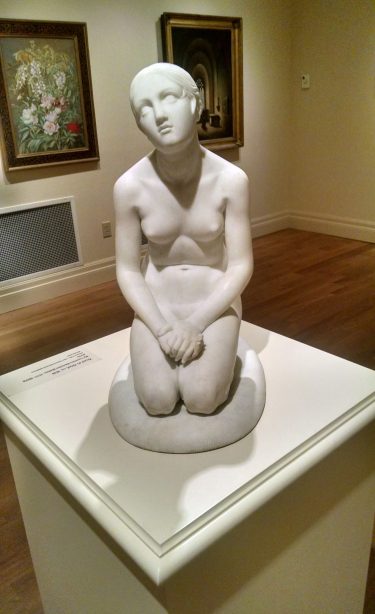 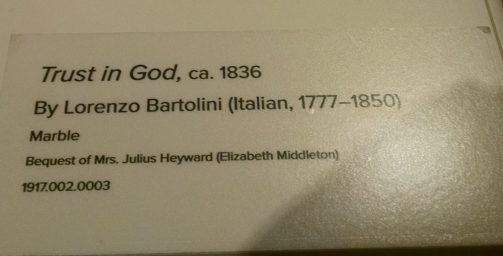 Is that an authentic facial expression or what? Have we all been there?

First, I have to tell you, it seems all good sculptors from this time period came from Italy. Many a good American sculptor went to Italy to learn their craft.

I found by the early 1800s, Neoclassicism was a style that was at its height in sculpting. American-born artists were beginning to make their mark in the art world. They traveled to Italy to learn their craft.

Wiki says, “Neoclassicism was an art style that celebrated physical characteristics in the spirit of Ancient Greek and Roman art. To 18th-century Europeans, the human figure in Greek art, with its cool, unemotional appearance, was the ideal and a means of conveying a sense of timelessness and reason.

And I think you can see that in the young lady’s expression above.

Second, it seems people in Italy at that time never button their shirts, if they have one on at all. And everyone must have bench pressed at least 250 pounds.

Below was my favorite piece in the whole museum.. 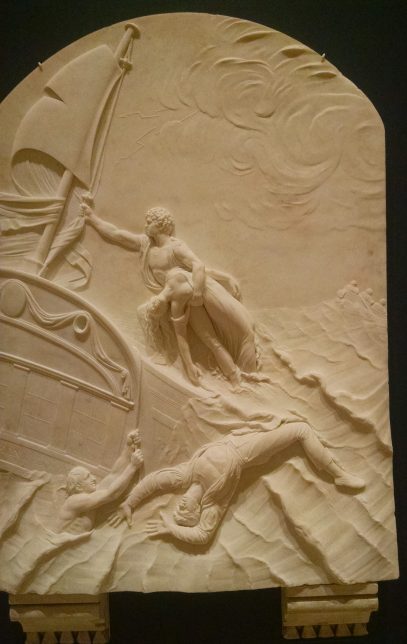 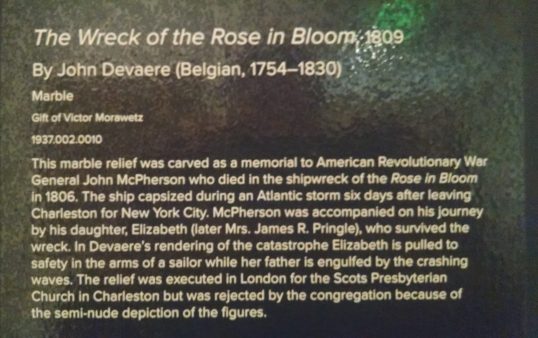 No, not of the Edmond Fitzgerald

I was amazed at the detail put into carving up this block of stone. You really can’t see it below but great care was put into the man’s hair, the dangling rope, his pants and even the lines on his drooping socks to make the art look real. 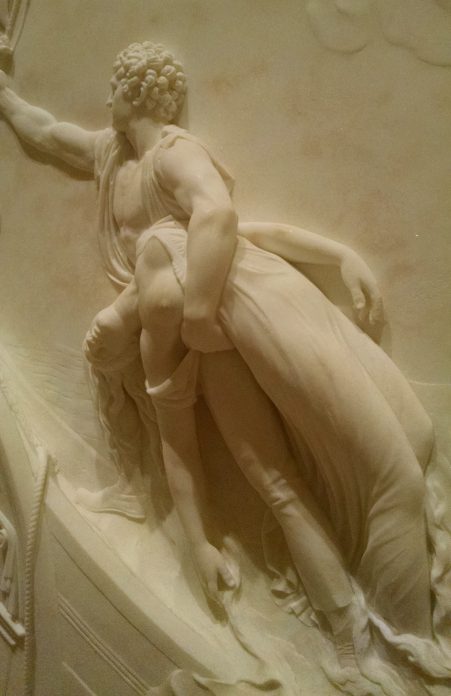 Now maybe my kids didn’t find these sculptures as interesting as I. Thankfully the museum had some staff to keep a watch over them while we appreciated the art work and the stories behind them 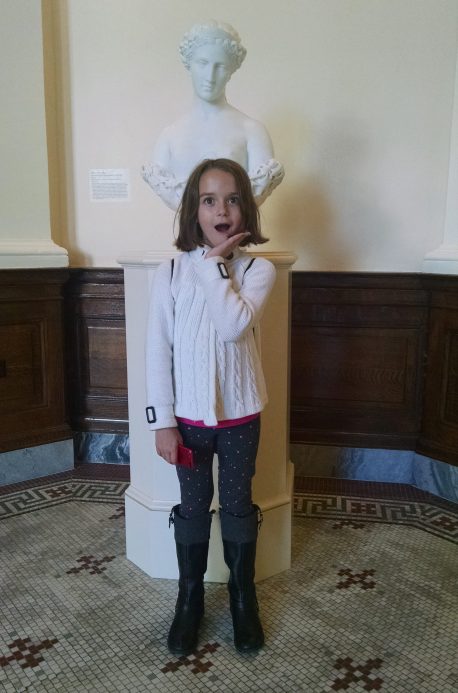 I bet that lady was from Italy too.. 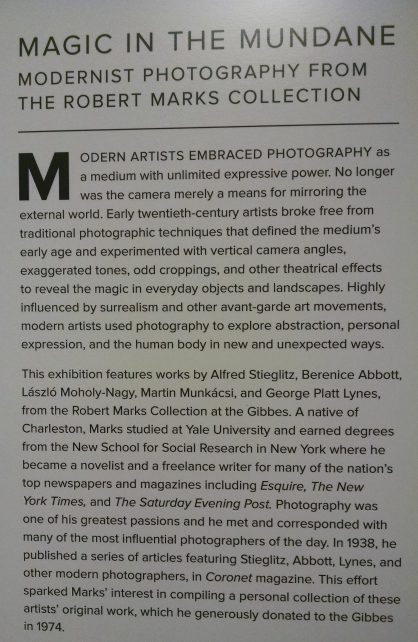 “Magic In The Mundane“. 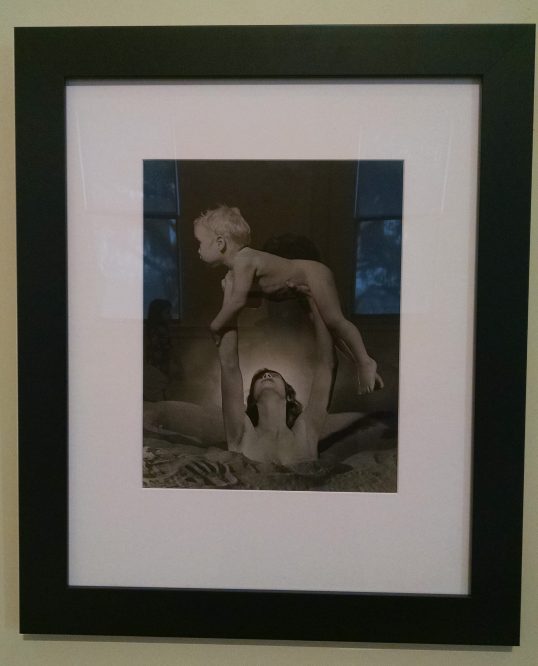 Does that make you think?

I would be interested in your ideas of what message the artist is trying to convey there in the Comments below. I have one or two interpretations.

Mostly, it reminds me of what great mothers do. But if you look at it, there is so much more going on in that pic, isn’t it?

Next is another, piece of art; a memory!

A memory recorded down over the ages.

This ‘memory’ or story was sitting beside a painting of some slave shacks from the Boone Hall Plantation in Charleston.

Do you remember when I did a POST on my oldest’s field trip there two years ago?

Well I thought this piece of art below interesting as an example of possibly one healthy way that slaves from that time used to help endure their bondage. To me, it really makes you think. 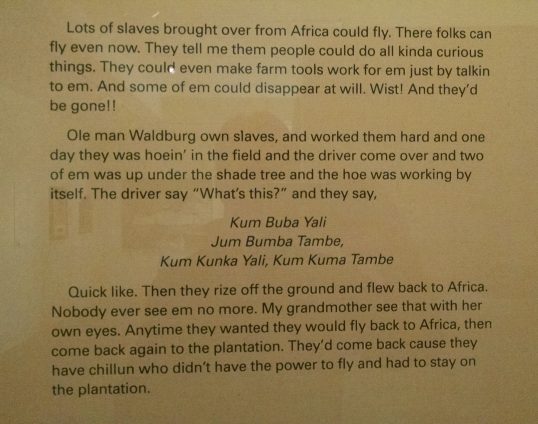 No, not talking of history like this below, although it is a good snapshot of an important moment in the US history. 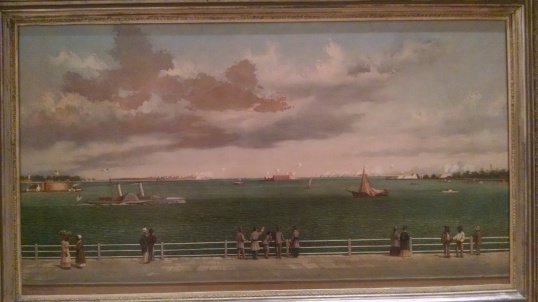 I mean like Historic Art that comes from the period it represents.

The Gibbes Museum had a series of portraits, old portraits from some Charlestonians over the years. It is not that these people were so famous or important (most were) but it is what they were wearing, their expressions that were captured, and the background that struck me.

Take a look at these dates on these paintings. They are legit museum pieces of art. 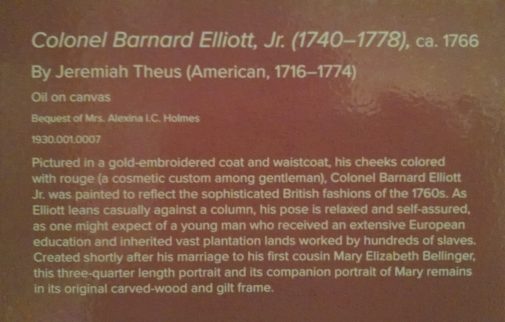 So this was an American born young man wearing British style attire. Did you catch that?

The date shows before the revolutionary war when the Carolinas had their ‘Governors’ appointed by the King at that time. Also I see he married his cousin. That’s one way to keep the money in the family. 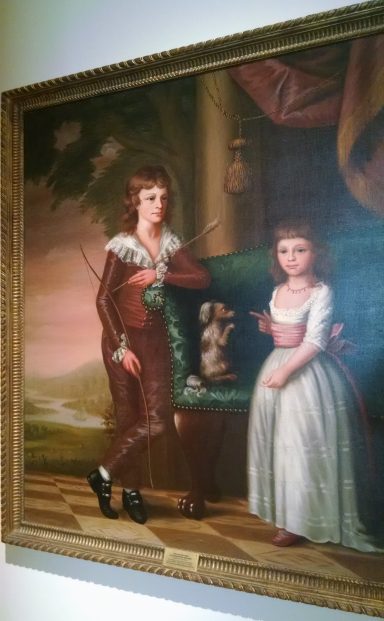 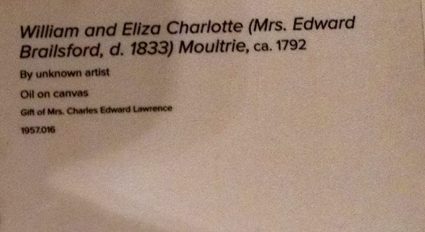 Was that a toy bow and arrow? Or a real one?

Remember the old Christmas Carol, Up On The House Top,  where a boy dreams of

” Here is a hammer and lots of tacks.
Also a ball and a whip that cracks.”

That Christmas classic was written circa 1857.

In one picture of some kids  from the 1800’s in the museum there was a young boy holding a little whip with a kinked knot or two on the end of the rope.

And finally I thought, and found out, this a particularly interesting one: 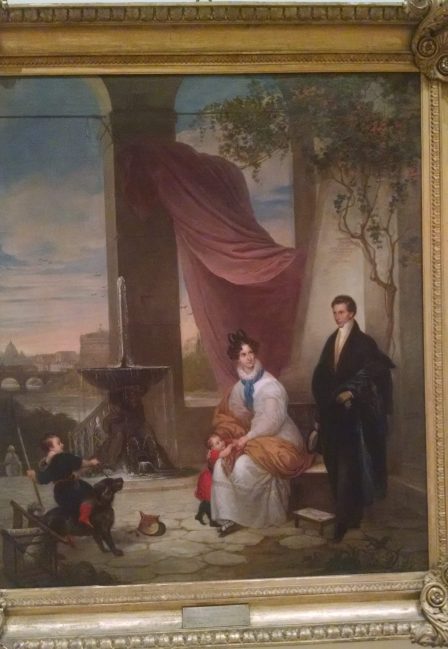 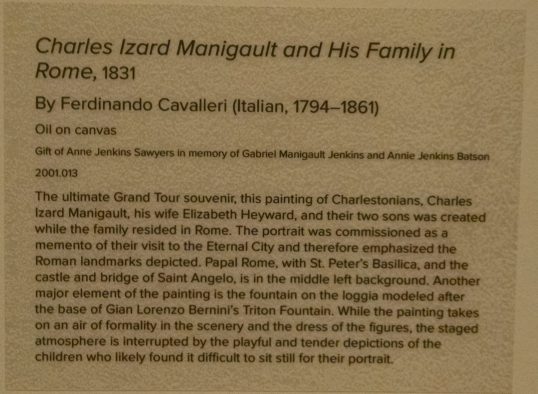 In this painting the family Manigault was vacationing in Rome. There were no cameras or cell phones of course. So the happy family just had to have someone paint a picture of them to capture the memories and bring them home. Tough life.

Beside this painting in the museum was a portrait of Mr. Maniqualt that was captured ‘in Philadelphia on his way to a 6 year trip to China.’

I can’t even imagine this type of life. A 6 year trip to China in the mid 1800’s? What would he use for currency?

His Grandfather, Peter Manigault was the wealthiest person in the British North American colonies  (Wiki says), He practiced law, became a successful merchant and banker, and managed his family’s over 200 slaves and extensive plantation holdings. His net worth of approximately £33,000 in 1770 is equal to approximately $4 million in 2016.[5]

Think about that for a second.

If it cost about $26 to build a house back then, how much was $4 million worth?

And so, as I thought, I realized this most be art. A painting on the wall that makes Magic from the mundane.

So what about you? What types of art do you like?

Enjoy your own art this week and weekend.

I hope you make some of your own!

“We believe art is the difference between merely existing and being truly alive.”

Like Loading...
Posted in Meet Me In Charleston and tagged and a whip that cracks, art, Art For Art's Sake, Charleston, Charleston History, Gibbes Museum of Art, History, I am still not a photographer., Museum Mile

8 thoughts on “Being a Tourist In My Hometown, Pt 1”