What’s that in the rearview mirror?

With a great week and weekend of Thanksgiving in the rear view mirror I just wanted to share some things from the past weekend before I go full throttle on more Christmas reblogs.    🙂

We had a wonderful fall weekend here in the Lowcountry. The leaves here finally gained some color and started to fall making a nice back drop for our Thanksgiving meal. 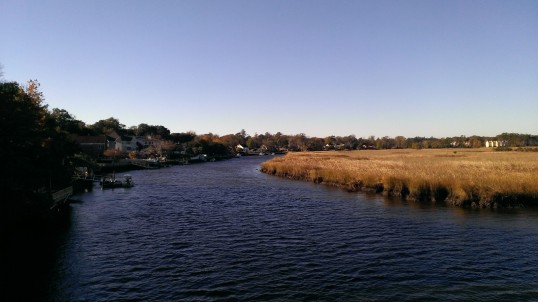 Fall over the chilly coastal waterway on the way to work

I am happy to say that this new house of ours has yet to ask me to rake any of the leaves. It was one of the perks of buying this house over our house we just left that had five 80 foot Gum Trees. Ahhhhhhh!

Thanksgiving week began with Dylan learning about the first Thanksgiving in school and then dressing up as Native Americans one day and Pilgrims the next. 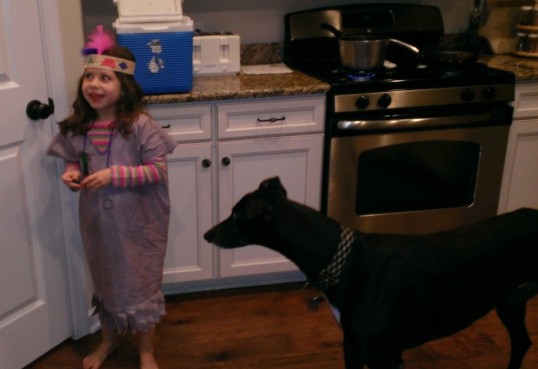 Aunt Sue came down and encouraged them to have some zany fun while Mom and Dad tried to turn invisible over the weekend.

You can tell the girls are getting older as they have gone from dressing as Disney Princesses to now….Rock Princesses! 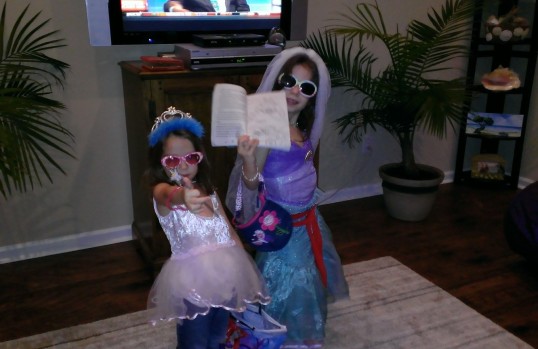 I was paying some bills one night and these two came walking in like this. I said, “What do you call this? Who are you supposed to be”

Dylan says with authority, “We are Rock Princesses!”

(sigh) I don’t like this getting older thing…not for them or me!

And yes, ‘the Big Game‘ was on over the great Thanksgiving weekend of college ball. Did you see it?

Yes, an unranked Penn State team went on the road to #12 Wisconsin and took them out!

Wisconsin never lose sat home! PSU was 24 point underdogs! Did you see this?

If you were game enough to click on that video, is there anything better than the spirit of college football as shown in the locker room there at the end?

And is there any more boring or dated uniforms than those whit- on-white uni’s Penn State continues to endure. Oh, well maybe Alabama!

Speaking of, to all me friends out there riding the Crimson Tide, Missouri might just take Auburn in the title game this week as the hang over of winning the Iron Bowl may be too great. PLUS, Michigan State has a good chance of shutting down undefeated Ohio States vaunted offense, knocking them from the unbeaten. Where does that put your Crimson tide then? Remember, you heard it here first!

Phew! Yes, all the excitement of the great football last weekend wore Skylar O-U-T, out!

Lastly, Dylan and Skylar received a very nice card in the mail from a very special Grandma and daughter. Dylan eagerly tore open the envelope to read the lovely card inside. (Thank you!)

Inside was money! Money to buy all of us ice cream the card suggested. Dylan thought maybe some lunch at a favorite Mexican restaurant.

So I talked to her about money that afternoon as she didn’t know what to do with it. I told her there are three things you can do with money.

You could spend it on something you like. Or you could save for something really special some day. Or, you might give it to someone who might need it more than you.

Well Dylan held onto that money ALL weekend! Everywhere she went she had those dollars clenched in her hand. She was still searching for some sort of utility for spending her new money.

Monday I drove her to school like normal. She still had the money in her hand if not in her little purse. She said, “Daddy, maybe I will give this money to Aubrey or buy her something today.”

Aubrey is her best friend in school that she met at the hockey game a few weeks back.

Feeling very pleased with the decision Dylan came to I applauded her idea and asked her, “Dylan, how would that make you feel then, to do something nice for your friend?”

Without hesitation Dylan responds, “Sad! I wouldn’t have that money any more!”

From the mouths of babes!

That’s all I have this week! We were pretty laid back here and trying to get a game plan for December. I’ll try to do better next time knuckleheads.

What are you looking forward to in the month to come?

I am thinking about smoking another turkey! That was too good last week and too few a times that we actually enjoy something that good and that simple.

Have a Great Weekend!

Bonus: Listen, I know this post was kinda week so I wanted to offer include this online game as a consolation. Click Here and help Dylan catch the snow on her tongue. (Hint you can guide the snow with your mouse.

Do you see all those leaves at our old house? That was only a week’s worth!

17 thoughts on “What’s that in the rearview mirror?”