Have you ever seen the face of Chaos?

I mean really, really taken a good look and stared down Chaos?

Sometimes its not easy to stomach. SOMETIMES it can be downright intimidating!

Well now that you have been warned, here is what Chaos really looks like, the good, the bad, the ugly:

The FACE of Chaos

Yes, my girls’ soccer team is named Chaos, and rightfully so! That pic above of the fearsome looking, WTF looking soccer team is their squad. They are currently undefeated!

OK, well they only played 3 games, and tied one of them…

Team Chaos actually has an ‘enforcer’ type person on the team that inflicts paybacks, runs fearlessly into opposing players, and trash talks with the best of them. 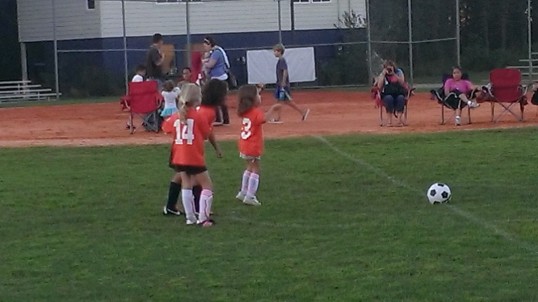 Skylar is easily the smallest / youngest player on the field; by two years. But that doesn’t stop her from talking some smack! (she’s so cute)

She will walk up to anyone and tell them what’s what.

So opposing teams better watch out!

The truth is my girl’s know very little about soccer at this stage, other than go up and kick the ball.

Although Dylan was a goalie for one half last night and held the invading soccer team scoreless….in-between cartwheels and jumping jacks.

Skylar just came home with a black eye and a busted lip.

We are pretty proud of them for always trying their best.

So you better watch out…

Like Loading...
Posted in Archives and tagged bruiser!, chaos, forever, GOAL KEEPER, Master, no choice, on their knees, soccer dad, stare them down, submission, the Punisher!, wishes, you better run!