Can some one get me a towel?

So I was tweeting my friend. She was frustrated she had to leave her home to evacuate to higher ground when she tweeted:

Well I told her Matthew is going to ahhh, arrive around 7pm and promises to last all night and into tomorrow morning before he fades around breakfast time.

OK, No! I haven’t started drinking.

I am just getting loony from watching the Weather Channel.

The rains did start here around 5pm and the Tropical Storm winds are supposed to start within the hour. The Weather Channel has changed their prediction to the worse, saying it will probably still be a Cat 3  storm when it gets to Charleston and there is a good chance it will touch land here instead of staying offshore like it did as it passed by Florida.

The hurricane bands are due to arrive closer to midnight and rock us (Get it? Rock us like a Hurricane?) all night long….till about 7am.

At least that is the latest forecast.

So Matt probably won’t disappoint my friend tonight after all.

So all we can do now is sit around and wait…

Well it’s not a big party.

I rented a movie for the girls and they invited their 4 year old friend over to watch it later tonight.

What we are looking at, according to our local channel, and not the sensationalized news from the Weather Channel, is  (hopefully) Category  2 storm but maybe a Cat 3 as it heads to our town. It has a good chance of coming very close to our peninsula before moving north. We may get the inner, more powerful bands of the storm on the coast. Winds should be between 50- 75mph but looking for gusts of up to 100mph.

The bigger danger is that of water damage, with 6-8 foot storm surge on top of  full 8-12 inches (eat your heart out Ms. Paige) of rain; on top of an already filled area water basin. These local water basins and low-lying tributaries filled at the last high tide but the winds are preventing the water from running back to sea they say.

The local tidal creek (above) looks like high tide at 11am this morning but High Tide was still 7 hours away when I took this pic.

We are all buttoned up at our home. We brought everything inside that we could. We are just waiting for the show to start. And while we live about 800 yards from that tidal basin creek in the pic above (and 20 miles from the coat, I mean coast) I was doing some research last night on our home surviving a Storm Surge and we are good for up to 20fteet. So no worries there. Only all the roads out of our development will be underwater somewhere.

And now, here is our Local On The 8’s

(Wayyyy too much Weather Channel!) 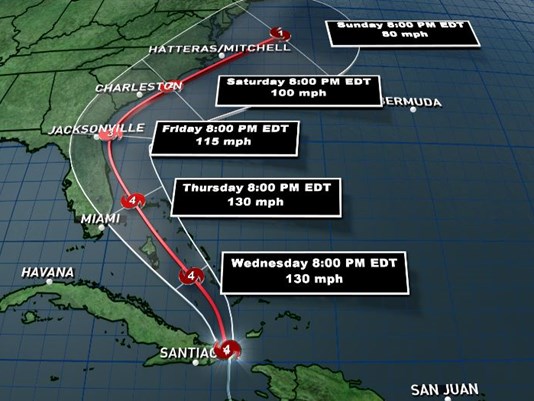 Here are times of the next four high and low tides for several locations that could see significant storm surge inundation.

I would like to give you an update tomorrow morning when we get up of what transpired over the night, maybe with some pictures, but we may be out of power Then. Pray to the power gods!

And as bad, or concerned as we get here I don’t want to forget about many others, thousands of others who have it worse than us, as I say prayers for those in Haiti and others where lives were lost.

Houses can be rebuilt.

Q: So what did Hurricane Mathew say to Hurricane Nicole?
A: I have my eye on you!
Stay tuned. Florida may do all this again next week.
Now back to the party!

Like Loading...
Posted in Archives and tagged Get back matt!, hurricane, Is that all you got?, Matthew, party