Some of you have been wondering what eventually transpired to our home and family after Hurricane Matthew struck last Saturday. And I imagine my not posting for a few days may have led you to wonder.

Our Internet went out.

Here is what our house, or at least our back yard, resembled after Hurricane Matthew. 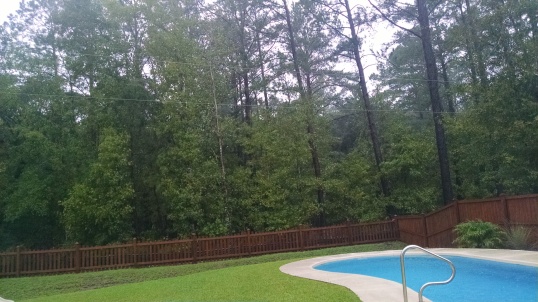 We went to bed Friday night as the winds of the Cat 3 or 2 storm were approaching Beaufort, SC (about 2 hours to our south).

We went to bed wondering what were we in store for that night? What would happen during the night while we slept? What would we wake up to? Would we hear a crash in the middle of the night.

So when I woke up around 7:00am Saturday (OK 6:30 cause I was making a video and I had to change my clothes cause all of you might be watching).

Yes, a welcome sigh of Relief!

My shower curtain did not blow away.

Still the hurricane was about an hour away from our town and had not arrived yet. It now appeared the eye would go right across Charleston. The winds did actually died down around 10 or 11am or so here as the eye passed. It was actually kinda disappointing after the big media storm build up.

“Come on Matthew! Is that all you got?”

Then Matt packed his bags later that morning and headed to Myrtle Beach, leaving drier but just as powerful gusts , er, from behind him. The winds, after the rain stopped, were every bit as serious as before the storm.

Still we were very fortunate. My whole neighborhood was actually. It just looked like a summer rain out front Saturday morning.

It wasn’t until I decided to go out and  drive around exploring our area that morning I saw what effects Matt had on us. Mainly it was just fallen trees and downed fences. Completely bearable!

Especially since it wasn’t my fence that was laying down. 🙂

I was most concerned about the Storm Surge of Matthew the days leading up the storm. I knew the storm itself was not going to be a catastrophic one. Luckily we never saw anything resembling a Storm Surge at my house, 20 miles inland. Below are some pics of what the surge did look like in the tidal creek that goes behind our house.

Here is the creek at high tide the day before Matthew:

You can make out the boat docks or landings as well as a good foot high Lowcountry grass across from the homes.

Here is what the storm surge did to those homes, again 20 miles from the coast: 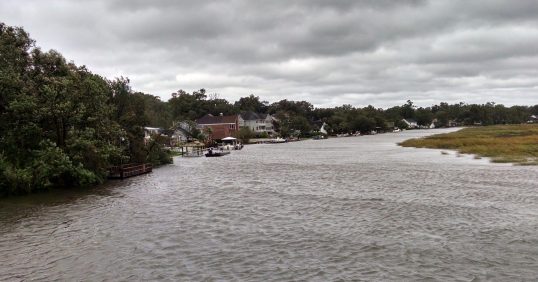 The docks are gone and the water is a good coupla yards up into the backyards (Yikes!). The outer layer of the sea grass is practically covered.

What did the Storm surge look like in downtown Charleston?

Remember this pic of the pink house on the Battery from last summer? 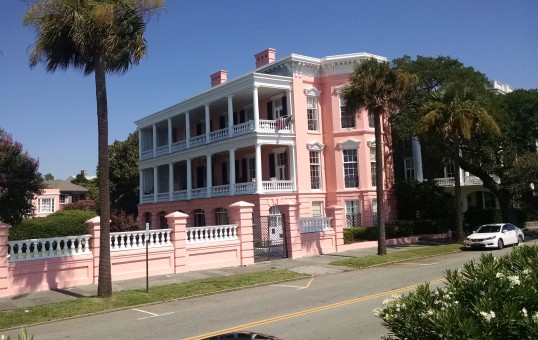 A pink flamingo colored property, reminiscent of the plantation owners in the Caribbean

Here is what Matthew did to introduce it to the Atlantic ocean: 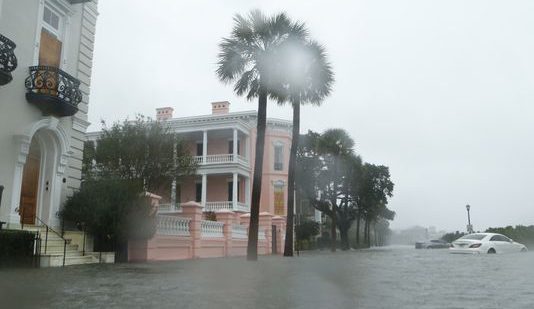 King Street at the Battery

That first pic was taken from on top the wall of the Battery so the water in the second pic had to breach that wall and accumulate there on King Street.

Still, it could be worse, right? Right Haiti?

And the effects of the storm did vary up and down the coast. I understand Interstate 95 in South Carolina, a good two hours from the coast, was just devastated with accidents and the 85mph traffic coming to a halt.

I could go on and on about Matthew’s wrath but I guess you all know the story by now.

As for us, we never lost power. We didn’t lose a shingle. My cable did go out Saturday afternoon around 1pm just as my team was ready to score. But if that is the price I must pay for a hurricane, so be it. I was lucky!

Say a prayer for those in Haiti and seriously think about doing what you can, anything, to assist the people of that poor Caribbean country.

There ain’t no trying to reason in Hurricane season…

Thanks for dropping by and looking in!

Tune in again for my next post with (more ) evidence that I may be the missing link…….

and I am not talking about my dancing…

You all are great!