I was watching TV late last night when NBC  told us about news of one of their own, Ann Curry. Ms. Curry decided to do something about the tragedy that occurred in Newtown, Conn.

I don’t want to rehash this too much as I am sure we have all dealt with this sad day enough privately. That day created feelings in me of “enough is enough” and “if this isn’t enough to make sweeping policy changes what would it take”, along with prayers for the victims and their family and friends.

I too have gotten caught up in the Christmas wave of to-do lists, good feelings, and preparations. I have not written those letters I intended to write. 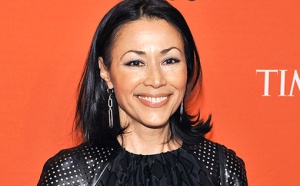 And then I saw this story on Anne Curry’s impulsive tweet:

“Imagine if we all committed 20 acts of kindness to honor the lost children of Newtown..(or 26 acts, including the heroic teachers.) I’m in. A growing number on Twitter are in. #20Acts #26Acts What do you think FB friends? If yes, share!”

As I found out last night, Anne’s thoughtful tweet has grown viral, turning into a world wide phenomena.

The idea is simple (courtesy of NPR):

‘Do “26 acts of kindness” — one for each of the 20 children and six adults killed last Friday at Sandy Hook Elementary School in Newtown, Conn.

Since NBC News’ Ann Curry tweeted that idea earlier this week, it’s taken off. Thousands have tweeted back to her about things they’ve done.

— Helping a stranger who’s short on cash in the check-out line.

You get the idea.’

Tens of thousands of people on Twitter and Facebook have seized the idea and are launching acts of kindness, big and small all over America. The acts are spreading overseas, including one tweeted from Borneo and even Afghanistan.

Social groups, companies, neighborhoods and individuals are all delivering their own unique message of kindness and respect via some 26 Acts of Kindness. Here is a page illustrating some creative ways of Kindness.

With the Spirit in the air of Christmas, I’m in too. I’m up to two so far today. Twenty-four more to go. Its never too late… 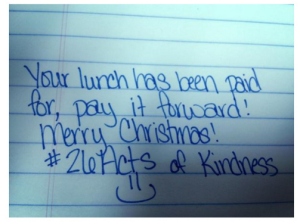 Like Loading...
Posted in Archives and tagged 26 Acts of Kindness, Ann Curry, just do it, kindness, let me get that for you, spirit of Christmas