Archive for the tag “banana pudding”

I was thinking Sunday night, after we put the girls to bed, if only there was a beer, or wine, or a tequila that tasted like….

I absolutely love banana pudding, which helped to make Sunday so great. But I’ll get back to that.

This past weekend, Sunday included, was a To-Do list type of weekend. I really need to get some things done around the house because after my procedure in 3 weeks I won’t be much good at anything for awhile.

So Sunday, the bulk of the day revolved around yard work, organizing the garage some more and finding the stink in my car (long story)

Sunday turned out to be a beautiful day, weather wise, with a cool breeze blowing from the north. So I jumped on the To Do list right after lunch.

The comfortable temperatures allowed me to make super fast times and so, not wanting to waste a great weather Sunday, asked Mom if I should fill up our two old kiddie pools for the girls when they get up from their naps.

She gave me a nod and it was on.

Like I said, we have two. We had one but Aunt Sue thought we could use another. So stopping short of giving each of the girls their own pool I became a little creative with these small pools and decided to make a water slide with the second one 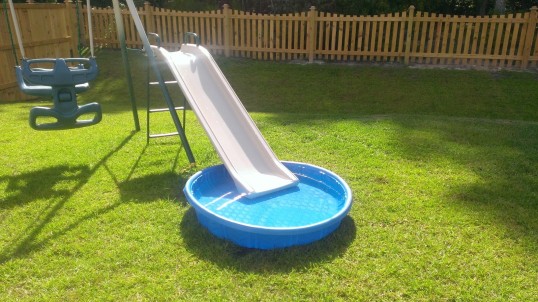 Dylan was the first one up. She was very open to playing outside in the water and so we jumped and splashed and squirted each other for awhile. The dog did not escape the mayhem either.

We could fire a stream of water at him and he would light up around our yard, like only greyhounds can do. I literally was scared, he was going so fast in our small confined back yard.

At one point he decided to change his circle around our backyard and cut in front of the above swing set, leaping over the extended hose at one end of the swing set and soaring past the blue wading pool beneath the sliding board at the other end.

Yes, in one stretch his momentum and powerful back legs let him leap literally from one end of the swing set to the other without breaking stride. I was in awe.

Skylar was up by now. Mom had dressed her in yet another darling swim suit. Thanks Grandmas!

This one was too cute! It was a little yellow and black striped one piece. She looked like a bumble bee! 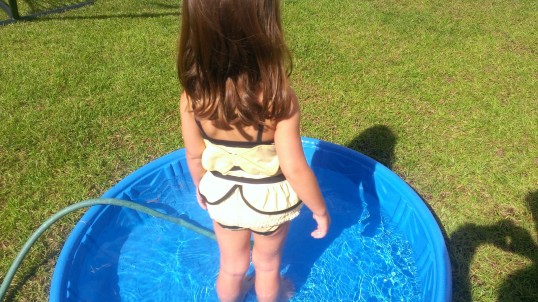 Can you see the little wings on her Bee swimsuit?

I asked her if she was a bumble bee. 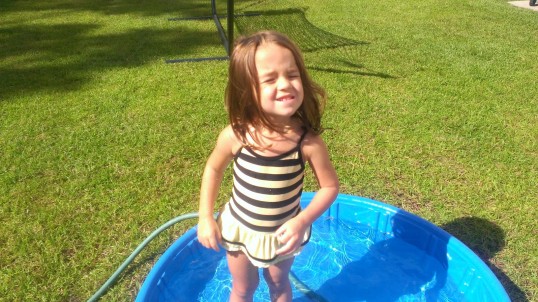 I’m going to sting you!

Dylan has always been our daredevil. And she had gone down the baby waterside several times already, before Skylar woke from her nap. But I thought the slide was just Skylar’s size. So I asked her ‘How about it?  Want to give it a try?’

And she looked it over, gave it some thought and walked right up those steps and had at it!

From that point on it was just a great wet and warm summer afternoon. The girls wet slid and splashed and squirted and laughed and chased. Typical kid stuff on the back end of naps on a wonderful summer afternoon. 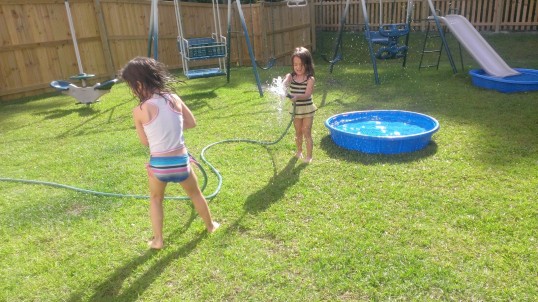 Yes, Chum leaped over both pools in one giant stretch, but not while the girls had the hose out

We had a great little afternoon after naps. Everyone was out enjoying the favorable temps, getting in on the fun, and sun or just chillin’ in their own way…..ah…..ah… 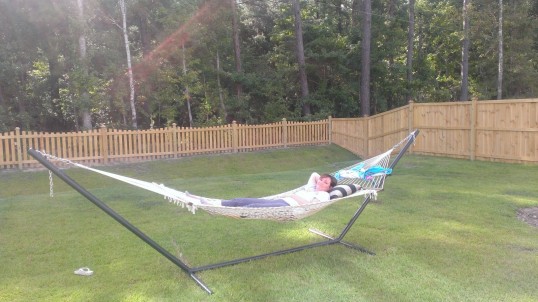 Will someone bring me a menu? I’d like to place an order…

Even Chum found time to soak up some shade and just ‘be’ in his new home…. 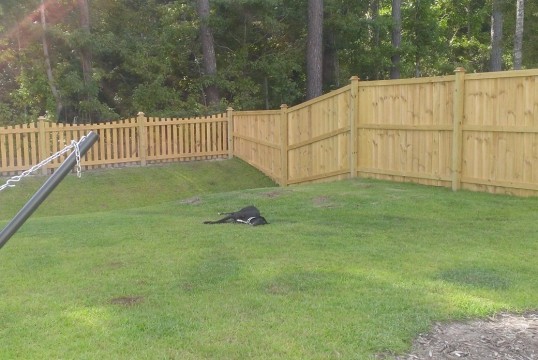 But eventually the shadows got a little longer in our backyard and the tummies got a bit emptier.

So Mom wrangled the girls upstairs to get baths for school in the morning while I was left with the task of dinner.

The hour was a bit late to go out so I just went with our outdoor summer theme.

I ran down to the local Piggly Wiggly and bought something for a cookout so we could eat outside.

Now if you know the stories behind our girls, you can’t really say cookouts are part of their heritage but summer cookouts were a big part of my growing up and so I tried a fast all-American version of it…Hot Dogs, Coleslaw, and (my favorite) Banana Pudding.

Skylar screams, “Happy Pool Day!” as we celebrated the simple fun we had that day at dinner.

This afternoon no one cried, or played hours on the phone, or stole the other’s doll.  Just good clean fun.

And no one saw Daddy steal seconds of the banana pudding, right out of the container, while the girls were upstairs getting stories read to them before nighttime either.

Gosh I really love this stuff! If only…..

“Hey Dylan? What are you doing here? I thought you were reading upstairs. What? You want some too?”

Have a great end-of-summer week everyone!

Oh yea, here is my new favorite commercial that I told you about last week…

I think I told you why….

Its the SONG! (chichi) Summer, Banana Pudding and Jeans On!

Posted in Archives and tagged banana pudding, ChiChi, cookout, if only, jeans on, pool, summer