I wanted to send a quick update on our dog situation.

The last time I brought him up, Chum or Chummy, was a well-mannered, friendly dog but with a growing urge to growl or even bite when he felt his space or freedom was being threatened.

Well the good news is he has stopped all that. (it looks like) We haven’t heard a story of him growling in 3 weeks. I think he is feeling more and more like a part of the family. And Dylan is a big reason why.

While we considered returning Chum to the greyhound adoption group, mom knew that would be hard on Dylan. She had already become attached to him.

I guess we all have our first favorite pet, one that we could call ours.

And so its been with Dylan and Chummy. When she gets up, she doesn’t get us up any more. She wants to feed and play with Chum. She is the first to let him out of his crate when we return from a trip. She hangs on him and loves on him, sometime too hard I feel. But Chummy hasn’t resisted.

So this past Friday, Dylan had one of those adorable outfits on from one of her special Grandmothers. Mom and I each thought it super cute that we reached for our cameras about the same time before D. was to hop in my car and jet off to school.

Well, Dylan felt too shy for all the fuss that early in the morning and hid.

Knowing she really does enjoy the hoopla of looking cute (like most girls I imagine) I suggested, “why don’t we take a picture of Chum and, Dylan, if you want to, you can stand beside him.”

You know what? It worked. 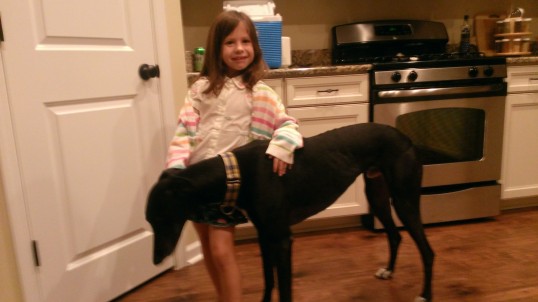 She really doesn’t mind the attention from looking cute…

She came out and stood beside ‘her dog’

And I say that as that is what mom suggested the other day. She remarked about how much D. loves that dog and how it is really HER dog (not mine).

Come on, strike a pose…

…she doesn’t mind one bit and will actually ‘ham it up’ for the camera sometimes.

Its funny, Dylan will lie down on the living room rug in hopes that Chum will lay down beside her so she can pet and cuddle with him.

Instead, when Dylan lays on her back Chum will go and stand over top of her, front feet on one side and back feet on the other, making a bridge over her.

And that’s what dogs do, right?

If a dog is feeling threatened of surrendering to a big dog they lay on their back and flash their belly. Its a sign, ‘I give up’.

I think Chum sees Dylan laying on the ground and stands over her to protect her. He doesn’t look down at her when he does this, he looks at us. Its really touching to see.

I think she gets great enjoyment out of it. And who wouldn’t?

And that my friends is the happy face that hops in my car and goes off to school for another challenging day of Kindergarten. And then she will run in the door and give her dog a hug when she returns.

Forgive the bravado blog readers but friends and family would like to know she has gotten a ‘green smiley face’ every day of school so far; and indication of their behavior in class. Five green smiley faces in a row allows them to pick from a treasure chest at the end of the week.

She has been placed in the first grade computer class and has passed two reading tests so far that qualify her for the second level of three levels in first grade reading.

Its only the beginning as there is really very few things she can’t read. ~We have to be careful what we leave laying around the house now a she will pick up on it. She read through the church bulletin this morning with our friends that sit beside us.

And I am working with her on math. I imagine she above level there as well.

On a separate note, I am still doing good, feeling great. The side effects of my procedure are about the same. Its all a matter of managing ‘life’ right now. Although all the literature I read said side effects (mostly urinary) really don’t kick in until after 2 weeks of the procedure, which was this past week. If  the incontinence was supposed to start at all, it would be now. But I have had none of that

I have to admit, for someone that has had their fair share of beers in the past, having a sudden urge to go is nothing new. I now have had to eliminate my Mountain Dews in the mornings as a way to cope in hope of preventing any soggy bottoms in the afternoons. Ah,actually, later that same morning. Cause I am a man of constant, ah………..sorrows…

Have a great week everyone!

Whatcha wearing for Trick or Treat?