There’s a big race coming up in Charleston, SC. It’s maybe one of the biggest 10k’s on the east coast that you never heard of, the Cooper River Bridge Run. It gets runners from all over the world. Lots of them! And I am not going to run it this year. Actually, I haven’t ran it in the past 3 years I think. Why? Its too hard to get to the starting line!

The CRBR has grown into a 40,000 runner /walker event. They actually cap the limit at 40,000. Some of the best runners in the world will be here. Runners, that will run in and possibly win the Boston Marathon a few weeks later will run in this race. They come from Kenya, Ethiopia, Russia, New Zealand, and the US. 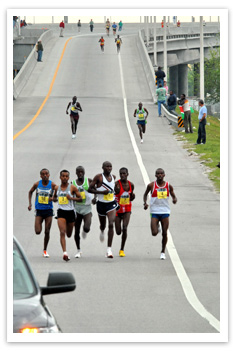 When I first got back into running about 10 years ago, the only race I had heard of was the Cooper River Bridge Run. I used to be a pretty good runner in high school so I wanted to see how I did. I drove some 70 minutes to get to the start and finished around 52:00 minutes. It was a learning experience. What I found was every runner I ran into always had a conversation include, “What’s your Bridge Run time?”. Every local runner looking for a challenge ran the CRBR. And I ran it every year after for about the next 10 years.

It took me a few races to realize the 10k run is actually 2 races in one. The bridge run gets its name because it spans the Cooper River in Charleston, SC. The Cooper River bridge is a two mile long span bridge. It’s about a mile going up, at a 4.5 degree angle, and a mile going back down at a more gradual decline. What makes the run nice is the bridge is right in the middle of the run. So you get a 2 mile start to warm up your legs before conquering the very challenging 4.5 degrees for an entire mile. The CRBR’s motto is “Get Over It”. A very cool name once you have climbed the bridge.

So, to me, the first race is to run 3 miles and make it to the top of the bridge at a competitive pace. This is the hardest race of the two I think. The second race, of course, is the second 3 miles in which I like to say I just put it on cruise and finish up. Your legs get some strength back on the long slope down and then you just run your pace to finish, sprinting the last few blocks if you can. Here is a video that is a good representation of the entire run:

Since doing my first CRBR I worked hard on my running. The next year I did the 10k in 48 minutes. But I knew I still had more. My goal was to come in under 44 minutes. Two times I finished in the 45’s. Finally, a few years back, all the training I learned, the workouts, preparation and trial and error paid off and I completed the race in 43:05, blowing away my goal. I was in the top 10% of all, including the Kenyans! I was a happy camper.

The run is always a lot of fun. It finishes at a park downtown, complete with bands, freebies, all sorts of vendors, and some of the happiest runners on the east coast. The smiles on the runners for completing the race is probably on of the best perks. We would end up walking downtown to the restaurant district get a great lunch, replace some fluids, and go home and take a nap or lay on the beach.

So why am I not running it again? The race has actually turned into 3 races in my mind. Now the first race is to get downtown, stuck in a 5:00am traffic jam, find a place to park, run to the bus shuttles that take everybody across the bridge to the within a mile of the starting line, get to the starting line and wait an hour for the run to start. It was kinda stressful just getting there. Check out this years video on the   tips on how to run the race.

Sorry, that is too many rules to follow, at too early of an hour on a day I should be sleeping in, in order to make me wish that I had not gotten out of bed. There is the early hours, traffic jams, finding a place to park, looking down while you run so you don’t trip over a set of ankles in front of you and then trapped in another jam as 40,000 people attempt to leave the downtown around noon.

Ok, I am exaggerating here. But it isn’t as fun as it used to be. A few weeks later is a mild-mannered, less competitive 5K run that is more my style. It starts at the local minor league baseball stadium, a miniature Camden Yards, then circles a local college before you come back to the baseball stadium, enter it by the right-field foul pool and cross home plate as the finish line while lots of the baseball players and other runners cheer you on, on the field. Afterwards a local seafood restaurant, Bubba Gump’s, caters a shrimp and grits dinner in the upper deck, complete with tasty shrimps, wines and beers before all the runners get bleacher seats to watch a great minor league game as the sunsets over the river. Does that sound like more fun than the Bridge Run? It actually inspired my fastest 5k of 19:20, something I haven’t come close to matching since.

Boy that is such a long way to get to the point! The point of this blog and my running history summary is there are a lot of fun races for runners of all levels out there. If you are a runner, at any level, do yourself a favor and go out and run in some. Running is one of the very few organized sports that we still have an opportunity to compete in, with our scholastic days in the rear view mirror. Take advantage of it!

Practically every local race, whether 5k, 10K, marathon, etc. is for a charity. So your entry fee is for a good cause. These charities want as many people to run these events as possible so they really try to make them fun. Check them out! There are runners of all levels, of all ages, of any ability running these. You are not racing any of these. You run for the challenge and to race yourself.

Simply, the next race try to beat your previous time or personal best. It can be a great motivator while your pounding all the pavements or battling the treadmill. For the 10+ years I have been entering races I found myself running faster in my mid 40’s than I did in my mid 30’s. That’s a great feeling! Howabout you? What are you capable of? You’re not just getting healthy, you’re building a sports franchise!

So where can your running hobby or training take you? Better health? Confidence? Stress killer? All great reasons and more to jog or run. Celebrate your hobby and passion! Make a date to do a local run or two or three. They are literally “Running Parties” at the post race events. Shouldn’t somebody throw you a party after all that time you spent running the streets and in the gym? You have earned it. Right?

Good luck and celebrate your achievements! And Have some fun!

4 thoughts on “Get Over It”